Official TAHR statement on the Mother's Day bombings
The Thai Alliance for Human Rights (TAHR) condemns the recent bombings in five tourist locations in Southern Thailand that occurred on August 12, 2016, Thai Mother's Day, as heinous acts murdering four and injuring dozens of innocent people.  Article 3 of the 30 articles of the Universal Declaration of Human Rights states: Everyone has the right to life, liberty and security of person. These acts clearly violated this basic human right.
Whether the objectives of the perpetrators (who have not identified themselves) are political, religious, or personal, they must not be pursued through acts of terrorism that take human lives and attempt to destroy the fabric of society.
Whether the objectives were political or religious, we call these "acts of terrorism" and reject terrorism as a legitimate method for airing grievances or for any other purpose. Ten Foreigners were among the victims this time, leading to greater international attention. However, we are also concerned that more than 6,400 have been killed and 11,000 wounded in the ongoing Muslim-Malay insurgency in Thailand's Deep South since violence erupted in 2014. This conflict has not gotten much international attention.
We offer our sincere condolences to the victims of the Mother's Day attacks and their families, and we wish the Thai police luck in their investigation, which we ask for it to be conducted without bias. http://tahr-global.org/?p=31253O 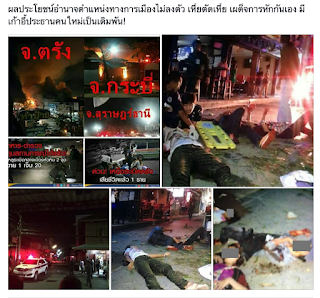